For other uses, see Alex (disambiguation)

Alex Smith, under the usernames Alsmiffy, Smiffy, and Smith, is a member of the Yogscast and a third of Hat Films. Smith, Trott, and Ross are particularly well known for playing Minecraft, Trials Evolution, and a variety of other games. Due to some of them having graduated in film production, their style of editing is often praised for being smooth and professional.

Ross Hornby, Chris Trott and Alex Smith make up the terrible trio of Hat Films, who produce high quality entertainment and low quality descriptions of themselves. They arrived at YogTowers in 2014 dressed in rags, but drinking champagne and munching on caviar. It was a strange day indeed.

Smith is often considered the "saltiest" of the Hat Films crew. He always jumps on the opportunity to (banteringly) insult Trott, or make an obscene joke in his direction. In one episode, it was revealed that Smith was incapable of complimenting Trott. Smith has said many times that he hates giving people hugs at Meet-ups and Conventions. At such events, he sports a sign on his shirt that says, "No Hugs", and often uses the #NoHugs on Twitter. His banter towards Trott often instigates Ross to join in with him. Surprisingly, despite Smith's attitude, he appears to be the one in the group that shows the most gratitude towards the fans. He has said on certain occasions that he is thankful for having fans that enjoy the videos that he and the guys make.

It was a Friday evening, Smith's parents had just been to watch their son's band [The Tin Box Boys] perform. Smith's parents had both had a Bloody Mary or two but decided that the car journey was only a short distance. They jumped into their car, Smith in the rear, his mother in the passenger seat and his father driving. Only three hundred meters from their home on the coast his father lost control of the car slamming into a salt truck, this killed both his mother and father instantly, Smith however only had a few cuts and was covered with salt. He stepped out of the car, still covered in the salt when suddenly a bolt of lightning hit him. Smith stumbled around helplessly, then, out of nowhere he was pushed into the salty ocean by the [then] Bayside Pusher [Now the Bristol Pusher]. A combination of his parents' deaths, the salt, the lightning strike and being pushed into the ocean caused Smith to be fused with the salt, thus beginning his lifelong saltiness.

Even though Smith had been granted this inhuman level of salt by the Gods, he was still in the ocean drowning. A whirlpool pulled him deep under the water's surface. He thrashed around under the water trying to catch a single breath, alas, there was no air. He was sinking deeper and deeper, quickly running out of oxygen. Smith passed out, he was moments away from death. Suddenly, something grabbed ahold of his leg, a fish? A shark? He woke up, he was still under the water, yet he could breathe! He was dragged ashore, he looked around and all he could see was a strange creature. Half salmon, half man. The creature stood up, its tail turning into a pair of human legs, no more than a few months older than Smith himself. The creature called itself Trottimus, Trott for short. Smith thanked this creature, it had saved his life, after all, he asked: "Is there anything I can do to repay you?" All Trottimus asked was for Smith to talk a while. The hours went by, they kept talking and talking, never a dull moment in the conversation. There was a spark between these two, a bond was formed that night, an everlasting friendship, between man and fish. 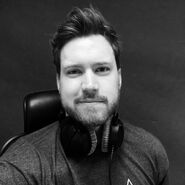 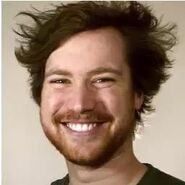 Smith singing with his old band, The Tin Box Boys.