Bo Johannesen, under the username Bokoen1, is a Danish-born YouTuber, Twitch streamer and member of the Yogscast, who primarily plays Hearts of Iron IV, alongside similar Paradox titles and other games. He shared a booth with the Yogscast at i63 and often collaborates with iSorrowproductions on videos. His hair was touched by Alex The Rambler and criticized it for having too much product, however Alex retracted that statement in the Masters of the Mediterranean Hearts of Iron IV stream. His face was also called greasy by his friends, leading to him being called Greasekoen1. Bo has 300K+ subscribers and has over 175 million views. On 12/29/21 all of the crew found out bo had a wiki during a hoi4 stream. (made by GIAubs)

His most popular series is currently 'Hoi4 MP in a Nutshell'. Other series he's created (normally sharing the 'in a Nutshell' title) have also drawn vast amounts of support. All of his MP in a Nutshell videos involve salt, toxicity, swearing, delusionalism and loud noises like ear raped audio and screams from hell. His notorious desktop background just says "Bokoen1's Desktop, Best Youtuber 2001 9/11", complete with a black background and an image of his channel's profile picture.

His mix of delightfully childish humour and playful audience combines well with the wide and varied cast of friends whom he streams and records with. These are Braun, Golden, Jack, Swimmy, Phillips, Rilber, Peef, Cho King, Flavius, Lowee, Dankus and College. They each star in different videos, although Bo is the only person to star in every video made.

Bokoen1's videos also have running gags. Most notably are: You can't take Paris, Historical Accuracy, Iwo Jima, Getting Dresseled, Golden Lost, etc. He includes Countryballs in his thumbnails and in his MP in a Nutshell videos made by tom123luan@gmail.com and genaral.dave.1@gmail.com.

The following table shows the games and series Bokoen1 has played or participated in. Please note that the Current list only contains series uploaded to the creators channel in the last 30 days. 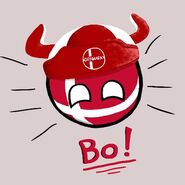