The testificates are off on their lunch break and it's up to you to clean up their mess! This article is a bit disorganised or messy. The testificates would love it if you can edit this page to make it better. 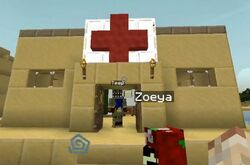 Cabertown (formerly known as Sick Bay), is a small testificate village in the desert where testificates go to learn medicine. Rythian carried Zoey here to recover after the nuclear bomb exploded, causing her to lose her arm. The town also contains several beekeepers, and a Zombie Dungeon.

After teleporting away, and back using a teleportation device created by Zoey after she recovered, the time machine exploded violently, covering the town and Rythian's base nearby in obsidian and Vis elements; and the section Ravs appeared in crushed and killed Greg, the mayor. Based on the rules in the Mayor Handbook, Ravs is now the mayor of Sick Bay and one of his first acts was to rename the town to Cabertown.

The Mayor, Ravs, has come under multiple assassination attempts already, so he's made it a rule to have a bodyguard on him at all times. He also had a statue built of himself; under which he nervously made a speech to the population, admitting that he accidentally killed Greg, but that he had an optimistic outlook on the future to repair all the damage, and to build a new pub, that will act as a Town Hall.

As time passes, Ravs seems to oppress the populace, killing some and putting others to work in the town's mine. Nilesy crash-lands outside the town and dumps a pool down the shaft, potentially drowning all of the residents within. Nilesy builds a pool and applies for the job of Border Control Operator.

Retrieved from "https://yogscast.fandom.com/wiki/Cabertown?oldid=325456"
Community content is available under CC-BY-SA unless otherwise noted.