The 2014 Christmas Livestreams, named Yogscast Jingle Jam, were the fourth annual charity livestreams. On November 10, 2014, Lewis stated in a vlog that the livestreams would be returning in 2014. On December 1, 2014, an official announcement was posted on the main channel. The streams began everyday at 5 pm GMT.

Donations were handled through Humble Bundle, where donators received games for their contributions. A $5 donation gave an exclusive TF2 item, the Thought that Counts badge, and a $25 donation gave 17 different games and DLC. All revenue earned from Twitch.tv advertising and subscriptions, Christmas songs, HP Omen brand deal, and Christmas jumpers was donated to the Jingle Jam as well.

All proceeds went toward benefiting Fauna & Flora International, MSF/Doctors Without Borders, End Polio Now, SpecialEffect, and Oxfam. Donators could choose how they wanted to split their money between the five charities. Oxfam congratulated the Yogscast on their successful Christmas Livestreams during a Q&A session at EGX 2015 with a band performance of Diggy Diggy Hole. 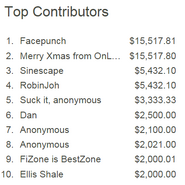 The Top 10 Donators from the 2014 Christmas Livestream

Over 1.1 Million Dollars was raised during the 2014 Jingle Jam