The 2016 Christmas Livestreams, nicknamed Yogscast Jingle Jam 2016, were the sixth annual charity livestreams. On November 20, 2016, the livestreams were confirmed on the Yogscast Subreddit. The first 2 weeks of the schedule were released on November 25, 2016. On December 1, 2016, the official announcement video was uploaded to the main channel. Morning streams started around 11am GMT, with warm up streams beginning straight afterwards at 2pm. The main streams then started at 5pm and lasted 6 hours.

Donations were handled through Humble Bundle, where donators received games for their contributions. A $5 donation gave an original "Print & Play" card game by Mark Hulmes called "Datlof". A $30 donation gave 60 different games, DLC, and items with two new games or items being released every single day as an advent calendar. Due to a huge increase in the number of donators compared to previous years, many games only had 50,000 keys available, leading to some games and items being sold out. All revenue earned from Twitch.tv advertising and subscriptions, and Christmas t-shirts was donated to the Jingle Jam as well.

All proceeds went toward benefiting: Mental Health Foundation, Cancer Research UK, International Lesbian, Gay, Bisexual, Trans and Intersex Association, Whale and Dolphin Conservation, Special Effect, and GamesAid; as well as a new option to choose any charity of your choice from a list of hundreds of thousands of charities. 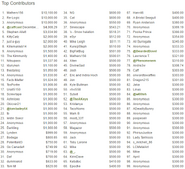 Nilesy, Zylus and Panda at $1.5 million of donations

Behind the Scenes by Sam Gibbs 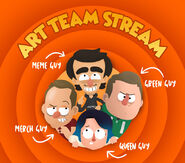