Minecraft - "Shadow of Israphel" Part 16: A Beacon of Hope

Creeper Boss is the leader of the creepers and is Israphel's second in command, as well as one of the two secondary antagonists of the Shadow of Israphel series. Creeper Boss was first seen towards the end of the first season, in Minecraft - "Shadow of Israphel" Part 16: A Beacon of Hope, standing on a glass ceiling in Israphel's Castle, deep underneath the cursed town of Terrorvale. In the subsequent video, Creeper Boss, in typical creeper fashion, blew himself up in a massive explosion that shattered the upper floor of the castle. It appeared that Creeper Boss had access to TNT which he used to cause such a massive explosion.

He uses TNT as his main weapon and sacrificed himself on one occasion to destroy the path for the heroes unsuccessfully. He works alongside Zombie Boss as a teammate and may be one of Israphel's most highly prized minions and/or lieutenants. He lived in Israphel's Castle for a brief period of time. Creeper Boss was encountered while rebuilding The Wall, and was able to produce TNT apparently at will. It is not known at this time if Creeper Boss is able to spawn the TNT through some inconceivable and insidious biological process, or if he carries the TNT in carefully concealed folds of his otherwise repulsive mottled skin. Creeper Boss assaulted The Wall several times, blowing multiple holes in the structure. During the attack, him and Zombie Boss were killed, then returned minutes later, giving us the info to know that Israphel can revive fallen minions. Finally the beacon tower was lit, and he was driven away into The Desert.

Unlike other creepers, Creeper Boss is fully humanoid and bipedal in appearance, as opposed to the usual four-legged look of his minions. Presumably, this genetic advantage is what gifts him with his status as leader.

There have been two types of Creeper Bosses that can be identified solely by appearance. The first Creeper Boss displayed the traditional mottled green and white skin of normal creepers. The second Boss displayed a desert yellow and white mottled skin. It has yet to be determined if these are two different individuals, or if Creeper Boss has evolved to possess a highly specialized form of chameleon-like adaptability.

It is unknown if Creeper Boss was created by Israphel or resided alongside him inside The Nether. It could be possible for them to have been alongside each other for a long time which would explain why he follows Israphel with such honour.

In a poll that was held from January to February 2013 on this wiki with all Shadow of Israphel characters to choose from, Creeper Boss was placed 23rd overall with 9 votes out of 4412 votes. 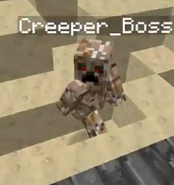