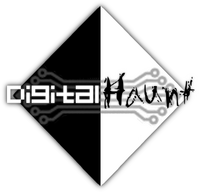 Digital Haunt (digitalhaunt.com) is a domain name owned by Tom Clarke (Sparkles*) from Area 11. Sparks revealed that he has owned this domain for a while now and had yet to use it. On May 12th, Sparkles* told the story of his concept idea in the Radio Sparkles* Soundrop room.

From this story he explained that he had been working on a concept idea for 7 years now which was first created by him and fellow Ghost Cassette band member - Kush. He explained that he carried on developing the idea in the years to come and it could possibly take another 10 years before it is made public.

Following this story many Elevens were interested to find out more on the topic. One of the Elevens, Connor, decided to make a Google Document where all theories and ideas could be written in one place. Many Elevens spent the next few days working hard trying to find clues in Area 11 and Ghost Cassette songs including videos and other types of social media. Through this time Sparkles*, Leo, Adam, Beckii and Sparkles*' sister Katy, watched over the Document progress.

After this on May 14th Sparkles* decided to make a wikia and through Cassandra's twitter (the 5th Area 11 member) made the public aware of the wikia. After a few hours Sparks decided to hand over the wikia to the Elevens. Sparkles* made the transfer to one of the Elevens - Abi and after this she made all of the Elevens that were involved directly with the Google Document, administrators of the wiki.

The Google Document information was transferred fully in a few days and the search carried on for Sparkles*' secrets on his ARG through the newly owned wikia.

Please visit www.digitalhaunt.com to add anything and everything on the topic, as the search continues!