From Ashes is a Minecraft series by Hat Films, played on a custom-made open world adventure map of the same name made by Gustavo Entertainment Team. The series ran for over 4 months.

The ultimate goal is to find 16 cores, disguised as wool blocks, and unlock the atomic shelter hidden beneath the island. The series ended prematurely on May 3, 2013 due to Hat Films facing frustrations by the difficulty of the map and drop in viewership.

The map can be downloaded from here.

As per the setting created by the custom map, From Ashes is set in the post-apocalyptic world. Chris, Alex and Ross survived the nuclear holocaust and set sail in on a ship. However, their ship impacted some rocks and are now shipwrecked north of Monument Island.

Instead of walking into Monument Island, the trio swim to a tiny island away from the shore and found nothing. They swim back to the Island by following a beacon which acts as a marker for the cores. This time, the trio finds themselves at the bottom of the cliff northeast of the Island near a tower structure. As night falls, aggressive mobs start to spawn and attack the trio. They manage to survive but with low health.

When day breaks, the trio climb up the cliff and begin exploring. They chance upon several mob spawners, particularly ghast and zombie spawners. The trio take cover at a hut for the night. After they manage to fight their way through a horde of baby zombies, the trio finally reach the Radio Tower and finds the Monument. This is when they realise that the Radio Tower is supposed to be one of the first locations they should have visited. Chris knows beforehand that the Monument is where they are supposed to place the 16 cores.

Before heading to the first dungeon, the trio finds a sunken plane. However, Alex accidentally sets off one of the TNT, resulting in a chain explosion destroying half of the plane. The trio eventually find themselves at Northshore Village, the Starting Area of the map. At this point, they now officially know their mission of finding 16 cores from 16 different dungeons; Chris read the rules and missions prior to the map but it is treated as he is unofficially aware of the mission. From there, they proceed to the first dungeon and successfully retrieves a core. They later retrieve more cores from a few more dungeons, although the core at the catacomb dungeon proofed to be tricky. The trio then head to the Three Peaks mountain in an attempt to conquer it next. After they find one of the three cores up in the mountain, they decide to not proceed further into the mountain and head back to the Monument. They face more trouble down at the Eastridge Mine. Things start to go bleak.

Hat Films recovers from 25 minutes of lost footage and has obtained 7 of the 16 cores so far. The trio head to the underwater city dungeon, but Alex and Ross quickly abandon it for a nearby haunted fleet dungeon. Chris manages to find the eighth core. By now, Alex has reached his breaking point and gives an ultimatum of the video having 4000 likes or the series will end; it received less than 4000 likes by the deadline. After Episode 12 was released on April 19, 2013, the series has been put on hiatus.

In the finale, Chris is the only person at the Radio Tower, telling the viewers that the series will continue despite receiving less than 4000 likes. As Alex and Ross are not around, he goes and look for them. From afar, Chris sees two people in paramilitary outfit; they are Alex and Ross. The duo give the command to commence dismantling of Monument Island. TNT has been placed all over the Island and is set off by Alex and Ross, destroying everything. Thus, ending the series. Chris dies in the explosion. 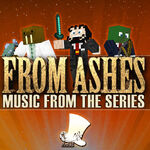 On the day the finale episode is released, Hat Films released the soundtrack album From Ashes. It features four soundtracks that were composed by themselves for the series.

The full album can be purchased on Bandcamp, iTunes, Amazon, Google Play and Spotify.

Retrieved from "https://yogscast.fandom.com/wiki/From_Ashes?oldid=336234"
Community content is available under CC-BY-SA unless otherwise noted.