Though this campaign is set in the world of Arrak and the adventurers are present, the settings in this episode are set in an alternate universe different from the Lightfall campaign. As such, the events that took place in this session is largely considered to be non-canon.[2] About a week later on another Jingle Jam stream, both Mark and Trott say that there are potential canonical elements from this session.[3]

In this episode, someone is attempting to spoil the Winter festive mood, so it is up to our heroes to help save the Frost Gala.

A devastating catastrophe, known as the Lightfall, rocked the world of Arrak. 46 years after the Lightfall, civilisations have been rebuilt and it is now a land of bustling settlements everywhere. Cam, Elora, Jiǔtóu and Trellimar, collectively known as the adventurers, are in Talis'Val, the capital city of the Dawn Republic. They have been going around the country to assist the Republic to restore balance and fight against the evil faction, Broken Sky.

It is now winter and snow falls across the lands. The Frost Gala is approaching, an annual celebration focused on Yulehand Jollyson, a legendary figure known to give presents to people. Through him, there is a tradition where parents encourage their children to be good so that Yulehand may give them nice gifts and not nasty gifts.

Mark Hulmes is the dungeon master for this once-off campaign.

Both Cam and Elora are familiar with the legend of Yulehand Jollyson since they were brought up being told of his tales. Trellimar lives in the Underdark and is not aware of the Frost Gala traditions. Likewise with Jiǔtóu since she was forced into slavery throughout most of her childhood. 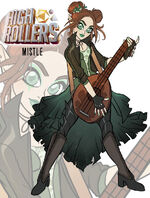 Mistle is a young adult, female, half-elf bard role-played by Kit Buss. She wears a green and black, flouncy, dress with a leather jacket over it. She also wears knee-high boots and have a rocker make-up. She carries a lute. She works for Yulehand Jollyson.

Diggy Diggy Hole! This section is under construction and being worked on. Have information to share that is not already present? Feel free to edit this page!

The adventurers are staying as honoured guests in a suite of the Champion's Hold, a building which serves as both the seat of government and the residence of Korak the Champion.

An attendant knocks on the suite's door before entering. He lets the adventurers know that a group requested to see them personally. Elora asks who they are, to which the attendant says that they are half-elves. He adds that they have a task befitting of them and treasures will be rewarded. Cam is excited upon hearing that there will be rewards, so he immediate agrees to see them. As such, the attendant leaves to bring the group in.

About five minutes later, the attendant returns to the suite with a young adult, female, half-elf bard. Upon seeing a sight of a young lady, Cam almost immediately stands up and acts regal. He exaggeratedly introduces himself to her but Elora shoves him off and says hi to the lady. The lady gives a good look at Cam before sassing him off.

The lady introduces herself as Mistle and says that she has been sent by the great Yulehand Jollyson to find them as he needs an assistant for some tasks. Cam gets excited on hearing of the legend. Both Jiǔtóu and Trellimar never heard of him before, leading to Cam, Elora and Mistle briefly explaining on how great he is.

Our heroes stumble upon a gnome named Devin, who have set up traps all within his manor to prevent anyone from taking back Yulehand's equipment, essentials for gifting presents, that he stole earlier.

Greatful for our heroes in returning his stolen essentials, Yulehand personally tasks them to give presents to his recipients, be it naughty or nice.

Jim Darkmagic is the first recipient and he has been very naughty, so our heroes have to find a way to sneak into his mansion to deliver his equally nasty present.

Gifting the second recipient brings our heroes back to the Underdark. Particularly in Gloom, where a gift awaits for Gurli. However, a sinister event had occurred, so it is up to our heroes to stop it from getting worse.

Our heroes are back at yulehand's Workshop to gift their third recipient. However, it turns out that the person is Tiamat, who wish to end the Frost Gala once and for all.

Merry Gala to One and All!Edit

Our heroes gift presents to their last few designated recipients, making everyone happy during the Frost Gala.

Retrieved from "https://yogscast.fandom.com/wiki/High_Rollers_D%26D/Christmas_Special_2016?oldid=305418"
Community content is available under CC-BY-SA unless otherwise noted.