Honeydew the Dwarf (played by Simon) is one of the three main protagonists of the Minecraft Series. He is a Dwarf of Khaz Modan (although, strangely, he is as tall as everyone else in the game), girthed from cheek to jowl by an impressive ginger beard. His beard is truly authentic, as it matches the rest of the hair that sprouts from the rest of his body.

He claims to possess the strength of a moose, occasionally going so far as to proclaim said strength in terms of the plural "meese." That claim may be an idle boast, as he did lose a critical contest of strength to Bruno, the Strongman of Carnivale Del Banjo. To be fair, this has generated a considerable amount of controversy for both the judging and the potential explosive possibility of widespread steroid abu--- er, the use of an invisible stone pick by the morally ambiguous Mr. Banjo and Strongman Bruno.

Honeydew lived in The YogCave with his pal, Xephos, until it was destroyed in the Season 3 opening episode by the newly created Dark Lord Israphel .

He claims to be an expert at Minecraft and demonstrates an often abrupt, but potent nonetheless, Dwarven charm, which he uses to sweep the ladies of Minecraftia off their blocky feet. In season three, otherwise known as Shadow of Israphel, NPCs (and, sometimes, even Xephos) are constantly yelling "Ye be dwarfin' it up!"

According to Cluster Chunk Live #1 (Team Yogscast), there is a breakthrough (possibly) that The Strippin is Honeydew's son! 'A family resemblance' states Honeydew. 'You're like my dad' replies The Strippin . This makes us question: 'Who is the mother?'

Honeydew is both the affectionate heart and caustic wit of the team, preferring to always run straight into any battle (unless it's a creeper in which case he generally becomes momentarily pious, constantly shouting "Oh God, Oh God, Oh God!" in what could be either religious ecstasy, or him freaking out), whereas Xephos is the more logical, though equally occasionally devout and rash, adventurer hero.

Born with a diamond pick in his hand, he is also exceptionally good at digging holes, and derives such joy and pleasure from the exercise that he occasionally spontaneously bursts into song. Not that that's a great surprise, since he's always one ready for a tune, like his famous song 'Diggy Diggy Hole'.

Impulsiveness: Honeydew is well known to be very reckless with his actions, the most well known is his love for placing TNT blocks in very close locations to his allies and friends without warning, even going so far as to killing himself in the explosion of the TNT because he placed it mindlessly. Similar occurrences happen related to fire, as he shows some obsession with setting things ablaze using flint and steel. He was very quick to apply for the task of burning down a pirate ship. Possibly pyromaniac, this trait has caused him to set The YogCave on fire, but Xephos interfered before the fire could destroy everything (a new floor was required, as well as the drainage of all the water that was used for dousing the flames).

Curiosity: As a dwarf, Honeydew has a knack for digging into/exploring areas with his pickaxe in the hunt for hidden paths, treasures or things e.g. creepers, that could kill him. This trait does have its ups and downs.

Bravery: Honeydew is usually the one who leads the way during adventure and attack his enemies head on. Even if they stop to either plan or heal, he normally continues without a plan.

Questionable Intellect: Sacrificing brains for brawn, Honeydew often makes bad decisions and has to rely on others to make the more rational choices.

Experienced Hands: Honeydew's years of mining as a dwarf gifts him with strong arms, hitting stronger, mine faster, and break things faster. He knows his blocks and how to mine effectively getting as much as he can out of it.

Tunnel Vision: Effectively curiosity that can be his undoing. (Definition 2: It's where you're digging in a tunnel)

Safety First: This is one of his precautions when attempting something dangerous or risky. However, in Hole Diggers 3, he states (not speaking for all Dwarves) that they have no regard for their own safety or others.

In a poll that was held from January to February 2013 on this wiki with all Season 3 characters to choose from, Honeydew was placed 1st overall with 1436 votes out of 4412 votes. 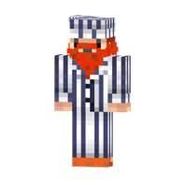 Honeydew in his "bed-suit" from the Coral Reef mod spotlight.

Honeydew in his normal suit. 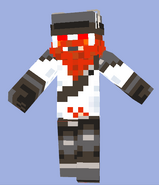 The Honeydew/Israphel skin that appeared when Honeydew was typed into any skin viewing website. 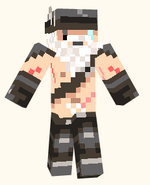 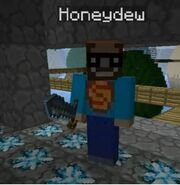 Honeydew's skin during the planetoids map. 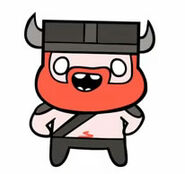 Honeydew (Simon) as he appears during the Minecraft Christmas song. 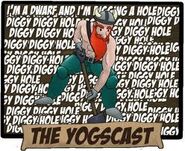