Yogscast Wiki
Register
Don't have an account?
Sign In
Advertisement
in: Shadow of Israphel Characters, Season 1, Season 3,
and 4 more

Leader of the Cult of Israphel

Israphel (a.k.a. The Dark Lord or The Pale-Faced Man) is the titular main antagonist of the Shadow of Israphel series and he is the leader of the Cult of Israphel. He is noticeable for his pale, ghost-like skin, creeper-like mouth, glowing red eyes, and is known for his mysterious antics. He's known to be a bit of a voyeur and a puppet master of sorts, preferring to work his evil from "The Shadows" while keeping a keen eye on Xephos and Honeydew. Throughout the series, his name can be seen in the backgrounds of videos. Although he started out as a small annoyance and a mysterious menace, he has now become something of a grand evil, responsible so far for many horrific acts. He is played by Sjin .

Israphel's backstory is shrouded in mystery. It is presumed that he once worked for Professor Grizwold. When the professor's experiments went wrong it summoned a creeper, which killed Israphel. He has a grave in the sandstone ruins of Grizwold's lab (his grave calls him Lehparsi, backward for Israphel) and also a grave in the Crypt of Terrorvale and Mistral City Graveyard.

He appears to be a ghost-like figure, but it is unknown whether he has always looked like this or exposure to The Desert may have changed him. It is unlikely he has always had this appearance, as his father, Reverend John, was a human. His story also seems to be contradictory, as it was thought that he was the entity that created The Sands, but that was at least a hundred years ago. It is now known that he did not create The Sands, rather that The Sands were made to keep the Sentinels, ancient machines of destruction, imprisoned. Israphel seems to seek to free these monstrosities, and bring Minecraftia under his control. Prior to the events of the story, Israphel kidnapped, and possibly killed, Karpath Antioch's wife and attempted to do so later with Isabel Antioch, although his attempt at possible murder was stopped by Pirate Tinman. It may be that Reverend John was always an undead, and Israphel used him (being a loyal cultist) to hide behind while he stalked Verigan Antioch II. He also supposedly "died" 5 years prior to the series.

It is also possible that Israphel is simply the latest being to be controlled a dark force, related to the Sentinels. The visage Israphel currently holds may simply be the work of that possession. This dark force is presumed to be ancient because of Templar Enoch's cryptic message in The Hand.

Israphel seems to hold a grudge against Verigan Antioch's male descendants, his son Karpath, and his grandson Verigan II. He has kidnapped, or attempted to kidnap, every female linked with them; first Karpath's wife, then Knight Peculier's love Daisy Duke, and then Karpath's daughter; Isabel Peculier. This may be to side-track and distract them from his efforts, as each has played a role in battling his evil. He also did something similar with Honeydew's love Granny Bacon. And by something similar, we mean that he turned her into a zombie and forced Honeydew to slay his love.

Israphel is first known, not as a character, but as a strange player on the server who built The Dark Constructions, and who skillfully rigged the back entrance to The YogCave with TNT connected to a pressure pad. His first real appearance is in Minecraft - Part 17: Yogcastle Construction Interrupted, when he attacks the pair in the Yogcave, and he gets a slightly bigger role in Minecraft - Part 18: Chasing Israphel, when Honeydew and Xephos try to chase him. He isn't seen again until Minecraft - Part 21: Ceiling Construction Interrupted, when he again attacks them at The YogCave, this time leading them to Terrorvale, and Old Peculier, who would coincidentally also go on to become a major character in the series.

It is revealed in Minecraft - Part 26: The Tomb that he has kidnapped Daisy Duke, and in fact has a fortress underneath Terrorvale, the entrance to it hidden behind his tomb. Despite Xephos and Honeydew's best efforts, he escapes with the kidnapped Daisy and takes her through a Hellgate in the Cave of Terror that our heroes had built earlier, to The Nether. Her fate is yet unknown.

Israphel is not seen in Season 2, but Old Peculier and Skylord Lysander arrive during Minecraft - "Survival Island" Part 11: Up and away! and reveal their plans to stop him.

He has a much bigger role in Season 3, (his name being in the subtitle) and is played as a much bigger antagonist. In Minecraft - "Shadow of Israphel" Part 1: Crash and Burn, he is revealed to have almost completely destroyed the Yogcave, with only a few bits of it still standing. After this leads the four heroes (Xephos, Honeydew, Old Peculier and Skylord Lysander) to Mistral City, he is not seen for quite some time, though he continues to command acts of evil. He orders Jock Fireblast to burn down Mistral City in Minecraft - "Shadow of Israphel" Part 10: Revelations, framing Lysander in the process according to Minecraft - "Shadow of Israphel" Part 24: The Fiend, and orders the capture of Granny Bacon, later turning her into a zombie and forcing our heroes to kill her. He also resurrects his father, Reverend John, as an undead, who is also killed. After watching Israphel himself follow Old Peculier (now known as Knight Peculier) into a tunnel, they chase after him. After having a few antics in the Carnivale Del Banjo and gaining a prophecy each from Madame Nubescu, they go to Verigan's Hold, where they read The Tale of the Sands. In Minecraft - "Shadow of Israphel" Part 15: The Battle of the Breach, Israphel gets his first big appearance, as he attacks the trio with a few minions as they try to rebuild The Wall. It is in this appearance where they actually fight, Xephos getting within a few feet of him and attacking him with his sword. After the three of them retreat, he waits at The Wall, still damaging it.

Later, while our heroes are exiting Grimjaws Treasure Hold, Israphel's face is spotted briefly by Xephos in a different desert, and they take chase. But a sudden storm hits, and they lose sight of him and instead find a humongous Stone Dragon and a temple, with a tomb that reads "The Tomb of The Dark Pharaoh Lehparsi." Several Yogscast fans noted that Lehparsi is simply Israphel spelled backwards. It is possible the storm was caused by Israphel to escape from the group, especially his old foe Pirate Tinman.

He converted Skylord Vitali to his side, ordering him to kill all the other Skylords, and to bring him the Skyhold to serve as his fortress, and airship.

His hand can be seen in the events at Stoneholm, as he seems to be the one who made some dwarves disappear, and made King Finbar sicken, then come back to life as a cultist, as well as the one who granted him his dark powers.

It seems his current plan is to awaken the Jade Sentinels, and sacrifice Daisy Duke to them. He seems to be using the Sands in a way they were not intended to be used, and is behind much of the events in The Hand, haunting Enoch inside his dreams, abducting Professor Webley, and brainwashing the clones produced there.

In a vision given to Xephos and Honeydew by Verigan, through the medium of his map, a possible future was shown. In it, Israphel and his followers were victorious, leading an army of evil robots, dragons and other dark creatures. The robots had a striking resemblance to Pirate Tinman. In the vision, the world resembled The Nether.

In a poll that was held from January to February 2013 on this wiki with all Season 3 characters to choose from, Israphel was placed 9th overall with 114 votes out of 4412 votes. 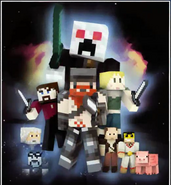 A portrait of the Dark Lord Israphel.

Xephos fighting Israphel in The Desert.
Community content is available under CC-BY-SA unless otherwise noted.
Advertisement