Jesse Cox (OMFGcata), Brooke Lawson (Dodger), Genna Bain (Wife)
John Bain, more commonly known by his username TotalBiscuit, or by the monicker The Cynical Brit (July 8, 1984 - May 24, 2018) was a British YouTube commentator on gaming and the games industry, a professional Starcraft II commentator, the former owner of Axiom eSports (now closed) and was part of the Polaris Network. Following a diagnosis of colon cancer in April 2014, Bain continued his work as a games critic all the way up until a month before his death from bowel cancer in May 2018.

John began broadcasting when he was just 13 years old and was a founding member and beta-tester for Live365 , John went on to become the Head of Specialist Music at his University’s radio station Demon FM and host a prime-time extreme metal show after which he took his talents to the realm of talk radio, hosting the groundbreaking World of Warcraft show “Blue Plz”, which is still the most popular solo-hosted WoW show on the internet. Bain spent five years working on WoW Radio with the likes of Mark Turpin, four of which he spent in the role of managing director of the station. It was during this time that he became friends with Jesse Cox when Jesse entered a competition called "WoW Idol", in which contestants had to make their own song or a cover of an existing song based on World of Warcraft. Jesse won third place in the contest with "Raid With Me", a cover of "Take on Me" by A-ha. Following his stint at WoW Radio, John decided to take his rigorous standards, work ethic and extensive experience and apply them to a new theatre, and thus “The Cynical Brit ” was born. Much like the Yogscast, TotalBiscuit found early success on YouTube making videos of the World of Warcraft: Cataclysm beta. He became an early member of The Game Station network (later known as Polaris) with other popular gaming YouTubers, such as Dodger and Jesse Cox, alongside whom he produced The Game Station Podcast (renamed The Co-Optional Podcast following the network name change). In April 2014 Bain announced that he had been diagnosed with bowel cancer and was beginning chemotherapy. On October 15, 2015, John announced that his colon cancer had spread to his liver and was terminal. By January 2017 his cancer had regressed and was, at the time, considered curable . In April 2018, four years after his initial diagnosis, John Bain announced his retirement due to failing health; he passed away on the 24th of May 2018.[1]

The following table shows the games and series John Bain has played or participated in. Please note that the Current list only contains series uploaded to the creators channel in the last 30 days.

TotalBiscuit operated two different YouTube accounts: 'TotalHalibut' and 'TotalBiscuit'. TotalBiscuit is the channel where his general gaming content can be found like well-known video series like WTF is..., Content Patch and 15 Minutes of Game. He also regularly streamed Starcraft 2 in a series called "ShoutCraft" (later rebranded as "ShowCraft") and showcased professional Starcraft 2 matches in a series called "Procraft" on his "TotalBiscuit" Starcraft 2 channel. He had a YouTube series based on the game Terraria played with Jesse Cox (OMFGcata). Simon and Lewis have since also created a three-part series and have tutored Jesse Cox on how to play Minecraft.

John voiced the character "Vinnie & Spike" in the game Awesomenauts and the "Steampunk Disciple" alternate avatar of the "Corrupted Disciple" character in Heroes of Newerth. He also voiced the "Crystal Ball" in the adult animated series Broken Quest and the "Medivac" in HuskyStarcraft's show HuskyTales.

John was a guest on the Geek & Sundry show, Tabletop, a board gaming show hosted by retired actor Wil Wheaton. He was also interviewed for BBC Radio 1's documentary on gaming on YouTube, Rockstar Gamers. 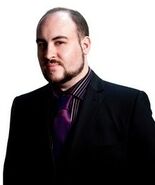 TotalBiscuit's avatar (most notably used for his YouTube page).

TotalBiscuit's King of the Web picture.

John wearing a lot of hats

TotalBiscuit's "most embarrassing photo" which he told his wife "not to post". She posted it. 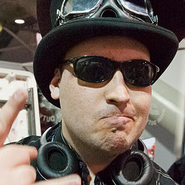 Totalbiscuit's guess at what MintyMinute looks like in XCOM: Enemy Unknown. 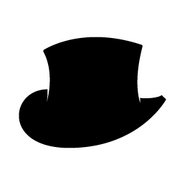