Alongside game commentary, Kim also acts as the Yogscast's reporter in the field with Hannah for events such as E3, EGX and Gamescom. She and Hannah also interview game developers during these events.

Kim joined the Yogscast as a video editor, but coming from a presenting background, she was soon allowed in front of the camera again. Armed with her trusty Totoro, a bowl of noodles and an ever changing accent, Kim’s continuing mission is to seek out new videogames and boldly go where no Pokémon has gone before. Currently she has 600K+ subscribers and over 160M views on YouTube.

Kim was born in England to an English father and a Malaysian mother. Since her childhood days, she has lived in Penang, Stavanger, Aberdeen, Falkirk, Hull, Venezuela, Colombia, Shanghai, Milton Keynes, Liverpool and Bath. She later went to the same university as Rosie Jones, Liverpool Institute for Performing Arts, and obtained a degree in sound technology.

Kim has worked for various video game publications as a game journalist. She has also worked for PlayStation Access both in front of and behind the camera.

Kim first joined the Yogscast as a freelancer editor in 2012 before transitioning into a full-time Content Producer in May 2013. Experienced in games journalism, Kim produces game reviews known as KIMPRESSIONS! and also acts as the Yogscast's reporter in the field with Hannah for events such as E3, EGX and Gamescom. She and Hannah also interview game developers during these events. Kim also co-hosted YogNews with Strippin and later Turps.

Kim's first foray into modded Minecraft was in her series The Apprentice, where Sjin, and later Sips and Duncan, teach her the basics of modded Minecraft. Prior to that, Kim roleplayed as her Minecraft character, Nanosounds, in Sjin's modded Minecraft series Feed The World. Both Duncan and Kim later co-hosted Galacticraft, the Flux Buddies series and To Infinity. She also hosted Nano's Village. Outside of the Yogscast, Kim has participated in various Minecraft collaborations such as Minecraft Summer Camp, One Life and UHShe Season 5.

Kim hosted the FRIGHT NIGHT series, which she later co-hosted with Hannah.

In January 2016, Kim was invited by Dungeon Master and then-Community Manager Mark Hulmes to join as one of the main cast for the Dungeons & Dragons (D&D) series High Rollers D&D. She first roleplayed as tiefling monk Jiutou Zhiji Jing in HighRollers: Lightfall. She later roleplays as half-orc barbarian K'ehleyr Ragehorn in HighRollers: Uncharted Territory, as fallen aasimar bloodhunter Worthless in HighRollers: Dead Reckoning. She is set to roleplay air genasi warlock Nova V'ger in HighRollers: Aerois. In July 2016, Kim is given the opportunity to be the Dungeon Master on High Rollers D&D after Mark was unable to be present for one of the regular episodes. Kim accepted the offer and plays the role of Dungeon Master for the first time on her first D&D One-Shot campaign The Haunting of Ennis House. She has later assumed the role for the subsequent One-Shot campaigns The Cabin in the Woods and The Horror of Overlook Inn.

On November 22, 2016, Kim released a video called "Yogscast Kim: The Next Chapter!" in which she talked about YouTube as a platform and spoke about her future on it. In summary, she said that after January 8, 2017 she would no longer be putting up content on her Youtube channel (instead, focusing on Twitch), although she may still be appearing on others' channels occasionally. She mentioned that there may be some more travel vlogs and suchlike on her channel in the future, but the majority of her gaming content on YouTube was coming to a close. She has not left and will not leave the Yogscast family for the foreseeable future.

On October 8th 2019, Kim released a video called "Return of the Kim! [VLOG] ". In this video she explained that she was returning to Twitch and YouTube. Since then she has produced a steady release of videos and playthroughs of games. This includes but is not limited to "Outer Wilds" and "Return of the Obra Dinn". Her content mainly consists of her livestreams that have been cut down to average video length and edited a small amount. She began uploading to YouTube again on August 1st 2021.

The following table shows the games and series Kim Richards has played or participated in. Please note that the Current list only contains series uploaded to the creators channel in the last 30 days. 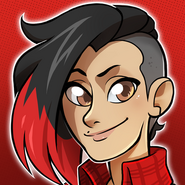 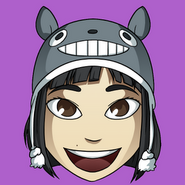 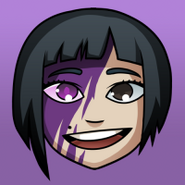 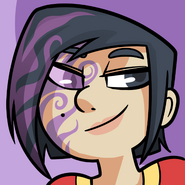 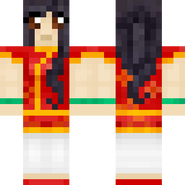 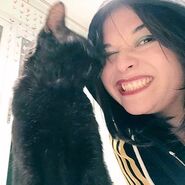 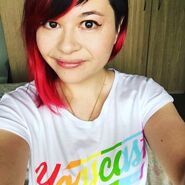 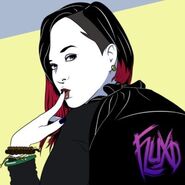 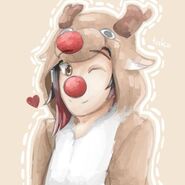 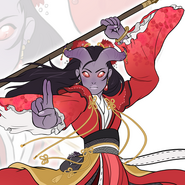 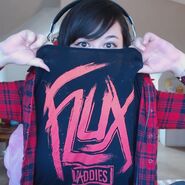 Kim with her apocalypse weapon.

Kim in her Mandrew costume.

A watercolour painting of Kim. 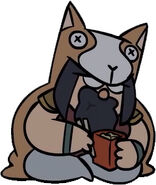 Kim as she appears in Diggy Diggy Hole. 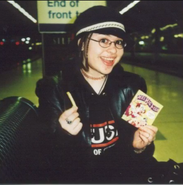 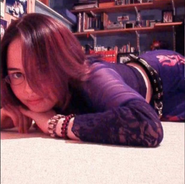 Matt as The Fourth Doctor, Kim in a Deadpool suit, and Duncan in an Iron Man suit. for Flux Buddies 3 Episode 42.

Kim (left) playing Dungeons & Dragons with the rest of the HighRollers crew.

Kim (left) and the HighRollers crew with Dylan Sprouse (second from left). 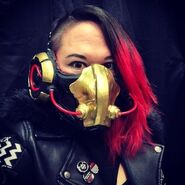