Zylus
Mousie, aka MissMousieMouse, is a full-time YouTuber, Twitch Streamer, instagram & internet Personality. She's been active on Youtube since Nov 2013, with her main channel Mousie, creating PG kid-friendly content. In January 2018, she created a second channel Mousie After Dark for more mature content.

She began livestreaming fulltime on Twitch in 2017. She signed with the Yogscast the same year.[1]

As of October 2019, Mousie has moved to the Netherlands and currently lives together with fellow Yogscast streamer Zylus in Hilversum.

On May 3rd 2020, Mousie and Zylus announced their relationship publicly on her YouTube channel and on Twitch.[2] 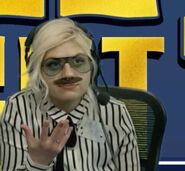 Mousie dressed up for Poker Night

Mousie at the TombRaider event. 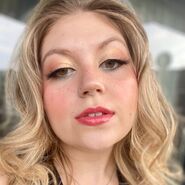 Mousie's current Twitter avatar
Add a photo to this gallery

Retrieved from "https://yogscast.fandom.com/wiki/Mousie?oldid=343899"
Community content is available under CC-BY-SA unless otherwise noted.