This article is under construction and being worked on. Have information to share that is not already present? Feel free to edit this page!

Minecraft - "Shadow of Israphel" Part 14: The Tale of the Sands

Pirate Tinman is a robot pirate with a bionic eye and one eye patched. He wears a red and white striped shirt and blue jeans.

He first met Isabel Antioch, his future captain, when Israphel attempted to kidnap or kill her one night. Tinman fended off Israphel, but was damaged in doing so, losing one of his eyes. Isabel patched him up as best she could, and took him in as her first mate. It is unknown how he knew about Israphel's attack, or why he protected Isabel. He is known for using very strange technology.

In Minecraft - "Shadow of Israphel" Part 20: The Dread Pirate Norris, Isabel sent the heroes to recover her missing first mate. The heroes encountered Pirate Tinman in a vault inside Grimjaw's Treasure Hold. The robot awoke from standby because of detecting abnormal noises (Honeydew and Xephos' voices). He scanned the heroes, and discerned that neither present a threat. He was unable to output sounds properly, possibly due to the damage he took at Israphel's hands, speaking some binary which translates to "Idiots" (01001001 01100100 01101001 01101111 01110100 01110011).

In the Minecraft - "Shadow of Israphel" Part 21: Grimjaw's Trial, Honeydew and Xephos found a small underground room which had a button in it. They also found a button near Pirate Tinman. When Honeydew and Xephos pressed each button simultaneously, a large hallway opened. They ventured down the hall, and found a puzzle. They had to press certain levers to open the door leading to the next area. They finally managed to open it, and proceeded through a puzzle involving pressure plates and dispensers, and go to the next room, which was a pit filled with lava. After completing an excruciatingly difficult puzzle, they are forced to leave Tinman behind. The two ventured through some hallways, and stared in awe as they gazed out of a window that showed a humongous pit, full of monsters, complete with an extremely oversized skull. When Honeydew asked Xephos if he thought Grimjaw Slugface was behind it, Xephos closed the episode by saying "I guess we'll just have to find out..."

After adventuring through several mazes, they found Tinman in a treasure room. They wondered how he got there, but are glad he was back. He showed them a security tape of Jock Fireblast stealing treasure, and they set out to The Desert in search of him.

At the beginning of Minecraft - "Shadow of Israphel" Part 23: Evidence, Honeydew and Xephos were trying to figure out how Tinman got across the lava in Minecraft - "Shadow of Israphel" Part 21: Grimjaw's Trial. During Part 21, Honeydew and Xephos returned to BBQ Bay, to find Pirate Tinman waiting there. They all went up to meet with Isabel, where it was revealed that Pirate Tinman stole all the gold from Grimjaw's Treasure Hold, shocking our two heroes. When Isabel asked Tinman to give them the map piece, he responded with "01001110 01101111 01110100" meaning "Not", and that the map piece was missing.

In Minecraft - "Shadow of Israphel" Part 24: The Fiend it was revealed Tinman had an eyepatch because of an eye injury he got while fighting Israphel, who was attempting to kidnap Isabel. His now covered eye used to be green as well.

In Minecraft - "Shadow of Israphel" Part 25: Visions it was revealed that if Honeydew and Xephos fail in their quest to stop The Sands, the world will be transformed into a nightmare, with Israphel ruling, backed by an army of evil robots, similar in appearance to Tinman. If Tinman goes evil or if he was just copied is unknown. There are some theories that Israphel engineers them or hires someone to do so.

Apart from being protective of Isabel, his personality may as well be non-existant.

In a poll that was held from January to February 2013 on this wiki with all Shadow of Israphel characters to choose from, Pirate Tinman was placed 17th overall with 20 votes out of 4412 votes.

How Tinman sees Xephos and Honeydew. 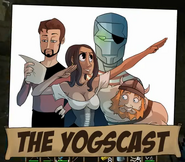 Tinman in the background of one of the intro photos. 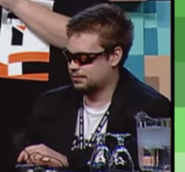