Skylord Amber was a Skylord stationed in Skyhold. She was presumably murdered by the vampire Skylord Vitali, just before our heroes and Skylord Lysander arrived in Skyhold, so little is known of her.

The picture in the room where Skylord Baako lay sick may have been of her. She also may have been the one in charge of Skyhold, as Skylord Lysander demanded to see her about the fragment of Karpath's Map found in Skyhold. Skylord Amber is also the only female Skylord in the series, although it is not known whether she was the only female Skylord in general. Although Skylord Vitali had put the slain Skylord's bones and belongings in a little tomb found underneath an apple tree, Skylord Amber's belongings or remains are not seen in the room. Even though this is the case, it is still assumed that Skylord Amber was slain alongside the other victims of Skylord Vitali. Since it seemed she was the only Skylord that Vitali did not kill in secret, her body may be buried in a grave, rather than hidden under the apple tree.

It has been suggested that Skylord Amber could have been a relative of Skylord Baako and Lysander, possibly being his mother or sister making her the daughter/granddaughter of Skylord Baako. This is supported by the discovery of her portrait in side what is presumed to be the former's house. However, it is possible that Bakko simply admired her as a person, or got it out of respect for her after her death.

In (Presumably) her portrait, Amber is shown to have olive green eyes and dark red hair that she keeps in a ponytail thrown over her right shoulder. She is also shown to have worn a red jacket with gold decorations, and a white undershirt.

Hardly anything was known of her personality.

Amber was originally a resident of Skyhold, but was murdered by Skylord Vitali shortly before the heroes arrived. She might have been the town's leader, as Skylord Lysander demanded to see her upon their arrival.

It has been suggested that Skylord Amber could have been a relative of Skylord Baako or Lysander, possibly being their mother or sister. This is further evidenced by the existence of her portrait in Skylord Baako's home.

In a poll that was held from January to February 2013 on this wiki with all Shadow of Israphel characters to choose from, Skylord Amber was placed equal 26th overall with 5 votes out of 4412 votes. 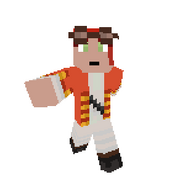 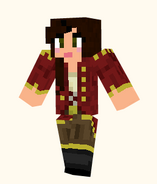