Skylord James was a Skylord stationed in Skyhold, and one of many killed by the rogue Skylord Vitali. He was then buried under an apple tree, along with Skylords Horus, Vimes, Finnigan, and the Unknown Skylord. His remains, and the remains of his fellow Skylords, were discovered by Xephos, Honeydew and Skylord Lysander. He was the only Skylord seemingly not killed by surprise, instead killed in a duel with Vitali.

Skylord James is never seen alive in the series, and very little is known about him. However, based on the circumstances of his death, he was likely one of the last to be murdered. His duel with Vitali seems to indicate he discovered Vitali's plot and was silenced before he could warn any of the remaining Skylords.

James seemed to be the more 'intelligent' of the Skylords as he was able to discover Vitali's plan. He also is likely one of the less experienced Skylords for he was unable to defeat Vitali in a duel.

In a poll that was held from January to February 2013 on this wiki with all Shadow of Israphel characters to choose from, Skylord James was placed equal 29th overall with 2 votes out of 4412 votes. 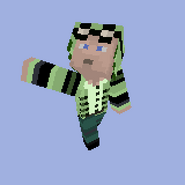 Fan-made skin.
Add a photo to this gallery

Retrieved from "https://yogscast.fandom.com/wiki/Skylord_James?oldid=290036"
Community content is available under CC-BY-SA unless otherwise noted.