The Co-Optional Podcast, formerly known as the The Game Station Podcast (abbreviated as the TGS Podcast), is a gaming podcast originally hosted by John "TotalBiscuit" Bain, Jesse Cox, and Dodger. While broadcasting under the name TGS, episodes aired on The Game Station channel, and later on the Polaris YouTube channel following the podcast rebranding. On 13th of November 2014, episodes moved to TotalBiscuit's channel instead, due to "disagreement on creative direction". Following the passing of John Bain in May 2018, hosting duties were taken up by his wife and fellow YouTube content creator Genna Bain and episodes continue to be released on her personal channel.

The podcast consists of one main host; traditionally TotalBiscuit, or in later episodes Genna, two side-hosts; typically Jesse Cox and Dodger, and a guest. On several occasions Jesse, Dodger, or another member of the Polaris network (such as WoWCrendor) has taken up the mantle of main host. Episodes typically consist of three segments and begin with the main host introducing the side hosts and guest(s) and allowing each to take their turn talking about what video games they have been playing in the past week, or since the last podcast was released. Following the first break they then move onto the week's video game news. After a second break the subject changes to the week's new releases and upcoming games, before signing off with announcements of what videos are coming up on their individual YouTube channels. On average, epsiodes vary in length between 2 and 3 hours; the shortest episode was Episode 49 (50 minutes) which was broadcast live from PAX East. Simon's guest appearance (Episode 6) was among the longest, at 3 hours 30 minutes. While there is a set structure, it is not rigid and is subject to change from episode to episode. They occasionally talk about video games.

Almost every episode of the podcast has had a guest and the guests of each episode are as follows: 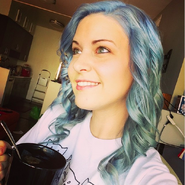 Brooke "Dodger" Lawson - One of the Podcast's side hosts.

Jesse "OMFGcata" Cox - One of the other Podcast's side hosts. 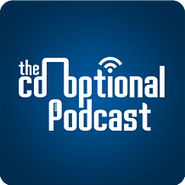 The Podcast's logo when Jesse Cox is the main host.

The Break image when Jesse Cox is hosting.

Start a Discussion Discussions about The Co-Optional Podcast