The testificates are off on their lunch break and it's up to you to clean up their mess! This article is a bit disorganised or messy. The testificates would love it if you can edit this page to make it better.

One Deceased, One Living

This article is about the clones from inside the Jade Sentinel. For Honeydew's clone in YogLabs see Honeydew (Clone).

The Evil Honeydews made their first appearance in "Shadow of Israphel" Part 39: Doppelgängers. They were created when Honeydew and Xephos uncovered a sinister cloning machine, ignoring the "Zombified Lalnas", which were likely previous failed clone attempts.

They were created when Honeydew stepped into a cloning machine to see what would happen and Xephos activated it. Honeydew was temporarily frozen in a strange liquid but managed to warn Xephos of the two naked Evil Honeydews as they emerged the machines from behind him. The evil Honeydews began running and were chased by Honeydew and Xephos, who followed a trail of Jaffa Cakes that they dropped whilst running.

While being chased by the heroes, the Evil Honeydews mutter altered phrases of Honeydew's, such as, "Dig-a dig-a hole!", "I'm all out of Joffo cakes", and "DERFGY", possibly indicating lowered intellect as a side effect of flawed cloning.

After failing to solve a puzzle and open a door, Xephos and Honeydew blasted the door down and eventually caught up with the first Evil Honeydew. He attempted to set off a TNT trap, which failed, causing a radioactive liquid (retextured lava) to begin to fall from the ceiling as a result of the explosions. The Evil Honeydew then spawned a creeper and a number of other mobs, attempting to delay the heroes while he ran for his life. The two heroes chased him until the original Honeydew came up with a plan to lure the evil clone with Jaffas. Xephos, noting that the clone wasn't as aggressive toward him, possibly indicating memories of our heroes friendship. They used this idea to take down the first Evil Honeydew, Xephos luring him with Jaffa Cakes, and then attacking him with a sword while Honeydew shot him with a bow; this killed him almost instantly. The second Evil Honeydew seemed to have disappeared, but his nameplate is seen falling below the screen, just as Xephos entered the Bone Room.

Shortly after, using a rail system, the heroes manage to catch up to the second Evil Honeydew. However just as they are about to reach him, he sets off several blocks of TNT, destroying the railway. As the heroes dismount, he yells "See you later, Shitlords!". Before the heroes can chase him, however, they are distracted by Professor Webley.

It is unknown what happened to the remaining Evil Honeydew.

In a poll that was held from January to February 2013 on this wiki with all Season 3 characters to choose from, The Evil Honeydews were placed equal 18th overall with 18 votes out of 4412 votes. 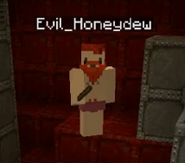 With a robot suit.
Community content is available under CC-BY-SA unless otherwise noted.