Um Bongo is a tribal man in Shadow of Israphel who seemed to be a slave to Skylord Jasper because of his readiness to escape with Honeydew and Xephos. When they first arrived, he offered to show Honeydew and Xephos to his master.

He appeared before the heroes at the end of Minecraft - "Shadow of Israphel" Part 25: Visions. He is also thought by Honeydew and Xephos to be a Tiki Man because of his tropical appearance.

Due to his appearance, he is thought to hail from the lands that Isabel Peculier once travelled to.

He escapes with the heroes in Minecraft - "Shadow of Israphel" Part 26: The Mansion, implying to the fact that he might have been forced to work for Jasper against his will. When he reached the ship, he didn't stay long as a map given to him by Skylord Lysander allowed him to find his way home.

In Minecraft - "Shadow of Israphel" Part 29: The Cage, Um Bongo was found to be the man who Skylord Vitali had imprisoned underneath the Skyhold. He tells them he was imprisoned because he spotted Vitali burying bones under an apple tree. The heroes then break him out, but he falls off Skyhold when demonstrating his jumping ability, presumably to his death.

Um Bongo has tan skin, and wears a tribal mask on his face. He has many colorful tattoos on his body, and wears grassy shoulderblades and pants.

Um Bongo does not like being held captive, as he had escaped from Jasper before and feared Vitali. He sticks close to the heroes because they rescued him from his captivity twice.

He likes to impress others with his "good jump".

Um Bongo was presumably born in the The Tiki Isles, where he was captured at some point by Skylord Jasper. Jasper made him his personal servant at Skylord Jasper's Retreat. The heroes freed Um Bongo along with Skylord Lysander from Jasper, and Um Bongo fled to the Tiki Isles.

Beneath the Carnival del Banjo in Skyhold Um Bongo was revealed to be imprisoned in a cage. After Honeydew freed him, he explained Vitali had caged him after he witnessed Vitali burying fresh bones near an apple tree. He then went on to show how good of a jumper he was, and jumped over one block. Unfortunately, he missed the one-block jump and fell towards the icy sheet blow. His current fate is unknown.

Um Bongo did appear in several following videos, such as the update pre-release video for 1.9 and snapshot 1.2. He also appeared in the Gulliver mod spotlight. Whether this is canon is unknown.

His head was found in a lucky blocks challenge video, meaning he might have indeed died from the fall.

Um Bongo has good relations with the heroes; especially Honeydew, who, after saving him from Jasper, proceeded to give him a big hug! He dislikes and distrusts Skylords Jasper and Vitali.

In a poll that was held from January to February 2013 on this wiki with all season 3 characters to choose from, Um Bongo was placed 5th overall with 196 votes out of 4412 votes.

Um Bongo swimming off into the horizon. 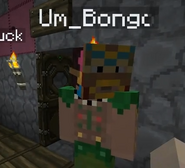 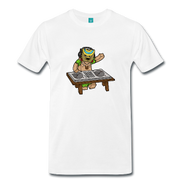 A T-shirt of Um Bongo in the Yogscast Store.