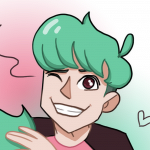 I was introduced to the Yogscast in October 2012, but I never became a true Yognaut until January 2013. Soon after I was introduced to this cool wiki--I don't know if you've heard of it before, I think it's called the Yogscast Wiki? Anyway, I was pretty active on it for a span of time between 2013 and 2014. I know next to nothing about coding and all, but still managed to somehow get the rank of Bureaucrat. I probably got the rank because I was in chat all the time.

I am currently in college, and am attending a pretty sweet art school where I am studying to get my major in Animation and Game Arts. Ever since I took the animation course at my high school I've known animation was a thing I was good at and wanted to do, so I went for it. And now I'm going to a real expensive art school. I'm gonna be in a lot of student loan debt in a few years. It's totally worth it though, my school's pretty awesome.

I might come on this wiki occasionally, but I usually don't. If you want to contact me for some reason your best bet would be to message me on any of the links listed below.

That's about all. If anyone reads any of this I'll be surprised. Anyways, until next time!

(By the way, did I mention I do art? Y'all should check out my website (or my Instagram) to see some of my stuff! ᕕ( ᐛ )ᕗ)

Retrieved from "https://yogscast.fandom.com/wiki/User:Totallyneena?oldid=336994"
Community content is available under CC-BY-SA unless otherwise noted.