Welcome traveller! Please take a seat and I will tell you a tale as old as time itself. Let me tell you about, The Yogscast.

So back in 2008 a young man named Lewis decided that he needed to share his best friend Simon’s charm with the world. From his mum's basement he started a little YouTube channel called The Yogscast. They gained initial renown for some of the most respected and entertaining World of Warcraft boss guides to-date. The duo then founded the #1 ranked podcast, the YoGPoD - a show featuring hilarious banter and tales with the occasional celebrity guest.

In 2010, Simon and Lewis showed YouTube viewers across the globe how to survive a night in Minecraft. This went on to form the basis of one of the most popular serialised shows on YouTube, The Shadow of Israphel.

Getting to this point had not been a two man job. They had received help from so many sources - Guildmates, friends, family and even complete strangers. Some of whom wanted help setting up their own YouTube channels, to which Lewis and Simon were only too happy to oblige. So The Yogscast started growing. Initially it was just the lovely Hannah, creative Duncan and magnificent Sips but soon many more were to follow. The Yogscast was no longer just a YouTube channel but now a whole family.

So now, 10 years later with over 20 million subscribers, billions of views and more than 20 channels in the mix, The Yogscast shows no sign of slowing down. No longer just sticking to uploading videos of the favourite games, mods and adventure maps the guys have expanded their content to include exceptional animations, music videos, tabletop games and live action pieces. Including the occasional tank, of course.

The Yogscast has grown to include some of the most talented musicians, animators, editors, writers, artists and business minded people around, but our aim still stays exactly the same… To always have fun with our friends.

Some of the original Yogscast staff have left or have been let off. The list of past members can be found here.

Timeline of the Yogscast 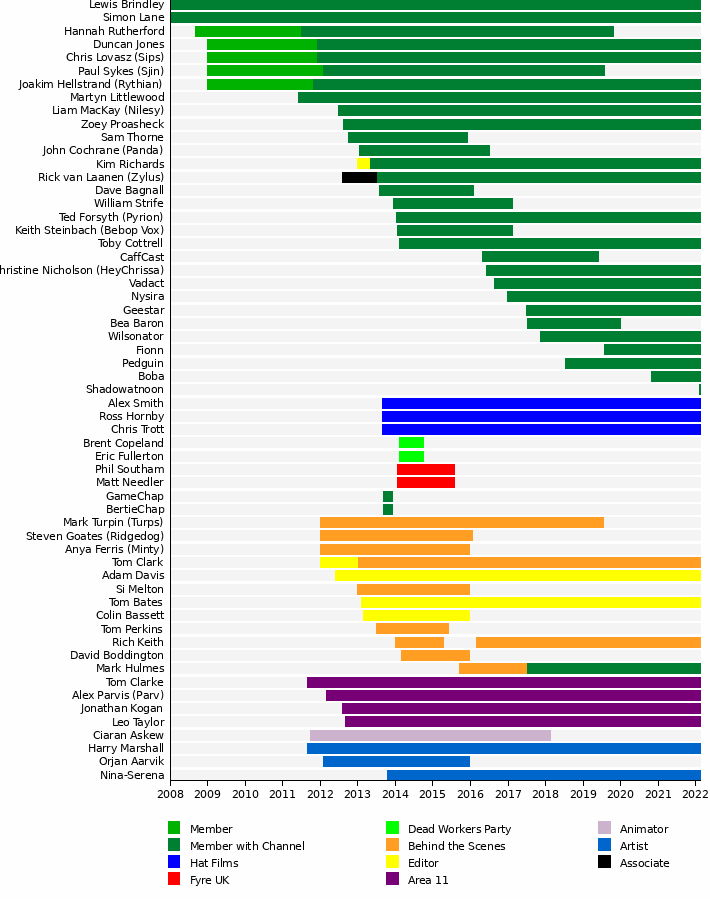 The Yogscast's name comes from the acronym YOGS, which stands for Ye Olde Goone Squade, the largest European World of Warcraft Goon guild, in which the founding members met. As a WoW guild they were led by guild-master Mearis.

In 2008, Lewis began recording guild activities and posting videos to YouTube on his personal channel 'BlueXephos' under the title of 'The Yogscast', with "YOGS" being the name of the guild and "cast" referring to broadcast.