The Yogscast Survival Games are large PvP events, first hosted on the 23rd of May 2012. In this event, 18 members of the Yogscast competed against each other in a Survival Games tournament, a game mode created by Minecraft machinima creator Vareide, which was heavily inspired by the Hunger Games novel series and film.

During the first Survival Games event, the competitors were split into teams of 2, as follows:

The event was hosted and overseen by Ridgedog.

During the second Survival Games event, the competitors were split into teams of 3 (except Zylus and Daltos) as follows:

Before the combat began, each competitor was given a chest of basic supplies, mostly to ensure that the players had a constant supply of Torches, although they contained other items as well.

Sjin was lucky enough to acquire a wooden sword from his supplies, and he used it to quickly kill Nilesy. Soon afterwards, Sjin and Minty encountered a large forest fire which Hannah had started with a Flint and Steel from her supplies. Minty then fell down a deep hole, into an underground tunnel system, where she was quickly assaulted by a large number of mobs. Sjin jumped down to help her, but didn't reach her in time, and she was shot to death. Later that day, Lewis and Simon were exploring a ruined building, when they were suddenly attacked by a creeper. They ran away, but another creeper exploded near Lewis, mortally wounding him, and he was instantaneously finished off by a skeleton. Sjin, still in the tunnel system, caused a creeper explosion, which Duncan and Hannah heard. Sjin then came up to the ruined building which the two were in. Duncan escaped, but Hannah could not escape from the tunnel, and was killed. Later, Duncan and Simon ran into one another. They exchanged food with one another, and formed a temporary alliance. Meanwhile, Panda was exploring a tall building, but fell off a ledge and died. At a similar time, Sjin attempted to attack Dave, who ran away to join back up with Nipde. They chased Sjin, but he escaped.

Late that night, Ridgedog revealed that he would be resurrecting all the dead players at midnight. Moments later, Simon ran into a zombie and battled it with his bare hands. Just as he killed it, a creeper snuck up on him and killed him. Moments later, Ridge built a staircase from the glass 'death zone' to the ground, and opened a gate surrounded by glowstone, which everyone in the chamber ran through. At a similar time, Martyn succeeded in killing Sjin, but Sjin escaped through the resurrection gate with seconds to spare. The only players who failed to get out in time were Turpster and Dave. Meanwhile, Duncan was killed by a skeleton showing off his impressively smart A.I, but respawned because he had reset his spawn point at a bed. Later, Panda falls down the same hole that Minty had fallen down. Meanwhile, Nilesy ran into Sjin. They fought an unarmed battle, with Sjin being the eventual victor. Meanwhile, Minty was running past the entrance to the bank, only to be shot by Martyn (in his video, it is shown that he didn't realize it was her until he had already fired his arrow, and he was very sorry).

Panda made a break for it through the tunnels, but was unlucky enough to run into Daryl and Harry. He ran, but was shot dead by a skeleton. Moments after, Harry was killed by a slime. The next morning, Daryl was killed by Martyn. Meanwhile, Rythian and Mexxy were fighting some skeletons, when Mexxy accidentally killed Rythian with his flaming sword. Meanwhile, Sjin was fighting some monsters inside a wrecked building, when he fell down a gap in the floor and died. Mexxy soon encountered Martyn and Toby, and he was killed by them. Meanwhile, Duncan and Hannah attempted to kill Sparkles*, but he escaped. However, Sparkles* was low on health, and he could not remember how to craft mushroom stew, and recover his health. Thinking he didn't stand much chance at surviving much longer, he used some ender pearls to take his own life.

That night, Lewis and Simon encountered Martyn and Toby back at the main spawn area. They fought well, but were soon killed by Martyn and Toby. The next day, Martyn and Toby encountered Duncan and Hannah near a wrecked petrol station. After a long and hard battle, Martyn and Toby were eventually victorious. However, Ridgedog and the dead contestants insisted that only one may win, forcing them into a final battle. After a long and saddening fight, Martyn eventually caught Toby and defeated him. Ridgedog then unleashed an enormous army of creepers on Martyn. He attempted to encase himself with ice from the host house, but could not place any blocks, forcing him to retreat out of the back of the house. Whether he was eventually killed or not is unknown (Martyn stopped recording his perspective).

The final rankings were as follows: 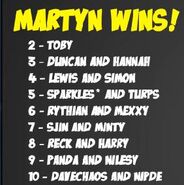